For the Mitchell Companies, the era before the 1900s was a period of birth and tremendous growth. Although there were a few major setbacks along the way, by the 1900s, the Mitchell brand was well-established and successful. Let’s begin with the patriarch of the entire establishment, Henry Mitchell.

Born in Fifeshire, Scotland in 1810, Henry Mitchell was one of eleven children. William Mitchell, his father, ran an express service from Edinburgh to surrounding areas, a service that little Henry Mitchell helped with until he was 15 years old. On that 15th birthday, Henry began a seven-year apprenticeship in the wheelwright’s trade. During that apprenticeship, Henry met his future wife, Margaret, and  on January 7th, 1832, they were married. It was a good year for Henry, when at the end of 1832, he was made foreman of a local wagon shop in Edinburgh. But the desire to explore uncharted western lands laid a claim on Henry, and in 1834, the happy couple set sail across the Atlantic to settle in the young city of Fort Dearborn (now Chicago), Illinois. Henry and his new business partner, Joseph Quarles, opened Mitchell Wagon Works under the incorporated name Mitchell & Quarles, building some of the first wagons in Chicago. In 1838, Henry and his family relocated to Southport, Wisconsin (now Kenosha, where Lewis was born). But after a little over a decade, Quarles had lost interest and so did Henry, leading them to sell the wagon plant in Kenosha to a man named Edward Bain in 1852. Just two years later, Henry and his family relocated again, this time to Racine, Wisconsin, for a new start. This choice to relocate would greatly impact the future of the Mitchell family because of a man named William Turnor Lewis.

Born on March 11, 1840, after his family came to America from Wales in 1838, William Turnor Lewis was one of two sons. In 1855, he went with his family when they relocated to the very same Racine, Wisconsin, that Henry Mitchell chose. At 15, the typical age for beginning an apprenticeship, William T. Lewis chose the carriage-trimming trade and studied that occupation for the next three years. By 1861, William had become the manager at a telegraph office. However, the beginning of the Civil War would change his career trajectory. In 1864, William enlisted in the Federal Military Telegraph Corps. However, after being relocated with the Corps several times, William fell ill and finished out the rest of the war back in Racine. Although unfortunate, it was providential that William Turnor returned back to Racine because on October 27th, 1864, he married Mary Isabel, daughter of none other than Henry Mitchell. This marriage led to a business partnership as well, as by the end of that year, Henry Mitchell offered Will a $5000 business buy-in option, and when William Turnor accepted, the two established H. Mitchell & Company.

Around this time of the family merger, one of Henry’s sons, William H. Mitchell, was experiencing his own change in careers, and in due time would also join in the family business.

William Henry Mitchell, son of Henry Mitchell, was born on November 13th, 1834, in Chicago, Illinois. Following in his father’s footsteps, he too wanted to head out west and make a name for himself. In April of 1853, William Henry Mitchell began a six-month journey to the Pacific Northwest, to the town of Olympia, Washington, specifically. It was a long and arduous journey, but one that he made successfully, arriving on October 6th, 1853, via canoe. The town of Olympia was small but bustling with opportunity. After doing woodwork and bartending, William H. Mitchell was asked to become business partners with a man named John Stewart, helping to run a bakery and a butcher shop. But that didn’t keep William H. busy enough. In 1855, the young man was also appointed Deputy Sheriff, and a few years later, on April 13th, 1859, he married Margaret Johns. William H. seemed to enjoy a wide variety of entrepreneurial endeavors and political aspirations. In May, 1861, he was elected as a delegate to the Democratic County Convention. In 1863, he and John Stewart dissolved their business ventures, leading William H. to invest in a sawmill business from 1868 to 1881. But even that wasn’t enough to keep him settled. In 1870, he became involved with the Olympia Branch Railroad Company, trying to bring the railroads to the Pacific Northwest and colonize the wild west even more. However, after a visit home to Racine in 1881, William H. returned to the Pacific Northwest in 1882 and opened the Portland dealership of the Mitchell, Lewis & Company.

Throughout the 1860s,70s, and 80s, Henry Mitchell capitalized on his expanding family to grow his business further and farther, becoming one of the most successful wagon companies in the country. 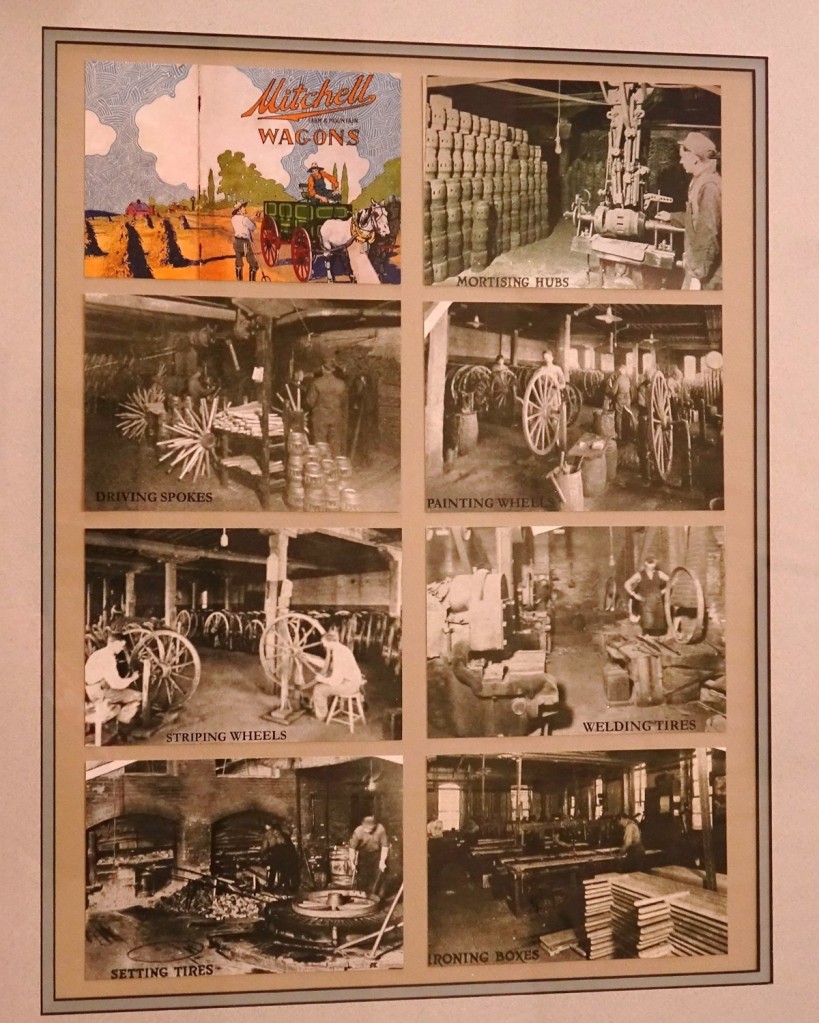 Photos inside the Mitchell Wagon Plant

In 1866, Henry Mitchell asked Calvin D. Sinclair, husband of his daughter Martha, to join the company, then reincorporating as Mitchell, Lewis & Company. This was good thinking on Henry’s part as the post Civil War boom led to a surge in wagon building and purchases. The men who had made a living being soldiers now turned towards the West to find a new future. By 1870, Henry Mitchell brought in his other two sons, truly making the business a family-centric one. For a decade, prosperity reigned. By 1877, Mitchell, Lewis & Co was one of the largest and best-equipped wagon manufacturing plants in the nation. It had over half a million dollars in capital, employed 7200 men and made 8,000-10,000 wagons a year. This came to a crushing halt in 1880 when the Racine plant burned completely to the ground. Instead of its ruining the company by spelling financial disaster, Henry Mitchell and William T. Lewis used the opportunity to begin anew, bigger and better. By 1882, William H. Mitchell was expanding westward, opening the Portland, Oregon branch of the Mitchell, Lewis & Company. In 1884, the company in Racine reincorporated as Mitchell & Lewis Company, Ltd, proving just how prosperous the business was becoming. For another decade, the company was outputting the finest wagons available for the day. In fact, by 1890, the firm was exporting wagons as far as South Africa, Australia, New Zealand, Argentina, Mexico and Canada. 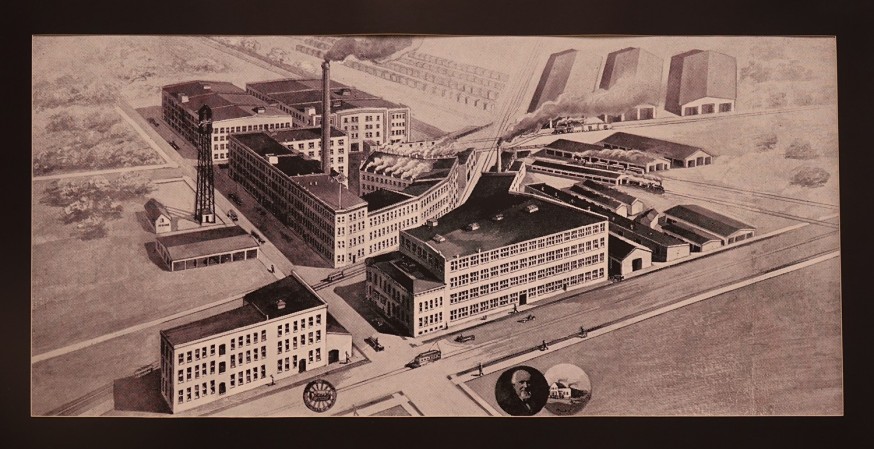 Mitchell Wagon Plant at the corner of 6th and Center in Racine. Notice the rail line coming in from the right.

On October 23rd, 1893, Henry Mitchell passed away and the company lost its patriarchal figure. The owner and management fell to William Turnor Lewis. On the cusp of the new century, ownership wasn’t the only change happening at Mitchell. In Racine 1898, William Mitchell Lewis added bicycles and motorcycles to the line of products offered. As the twentieth century dawned, the company had capital of $1.8 million dollars and production had expanded to 25,000 wagons per year. But the new shift toward motorized vehicles, beginning with the motorcycle, would be the path the Mitchell vehicle production would take.